ForwARd Arkansas and the Arkansas Coalition for Community Schools (ACCS) have long partnered to support the Community School model as a success strategy for schools, students and families across the state. This approach focuses on identifying the needs of and connecting students and families in a specific school to community-based resources and supports that can help remove barriers to learning.

ACCS and ForwARd Arkansas kicked off a new phase of their Community Schools initiative last week when they gathered key stakeholders to discuss how the Community Schools model can be used to support students in both rural schools and schools in cities like Little Rock. Participants included state legislators; representatives from Little Rock Mayor’s Office, Little Rock School District, Rural Community Alliance, Arkansas Education Association, Arkansas Association of Educational Administrators, Arkansas Advocates for Children and Families and Arkansas Department of Education; as well as a wide range of service providers and representatives from Independence County.

While the specific approach used in each Community School is determined based on specific local needs, all community schools consist of four key pillars that together create the conditions necessary for students to thrive:

Featured speaker José Muñoz, director of the Coalition for Community Schools, a national organization that serves state community school coalitions, emphasized that these four pillars do not benefit only poor, black and brown children or only students in urban districts. They can support children in need of supports in all schools at all income levels.

In the days ahead, we will organize meetings in Little Rock to consider how the community schools model could be benefit the district and continue to raise awareness of and identify resources to implement community schools in rural districts throughout the state.

Community schools have the potential to level the playing field for all Arkansas students and families by providing additional student and family supports to meet the challenges poverty creates in children’s lives beyond the classroom. Our drive to ensure equitable opportunity for all students has heightened the urgency to see this solution implemented widely across Arkansas.

Learn More about the Four Pillars of Community Schools 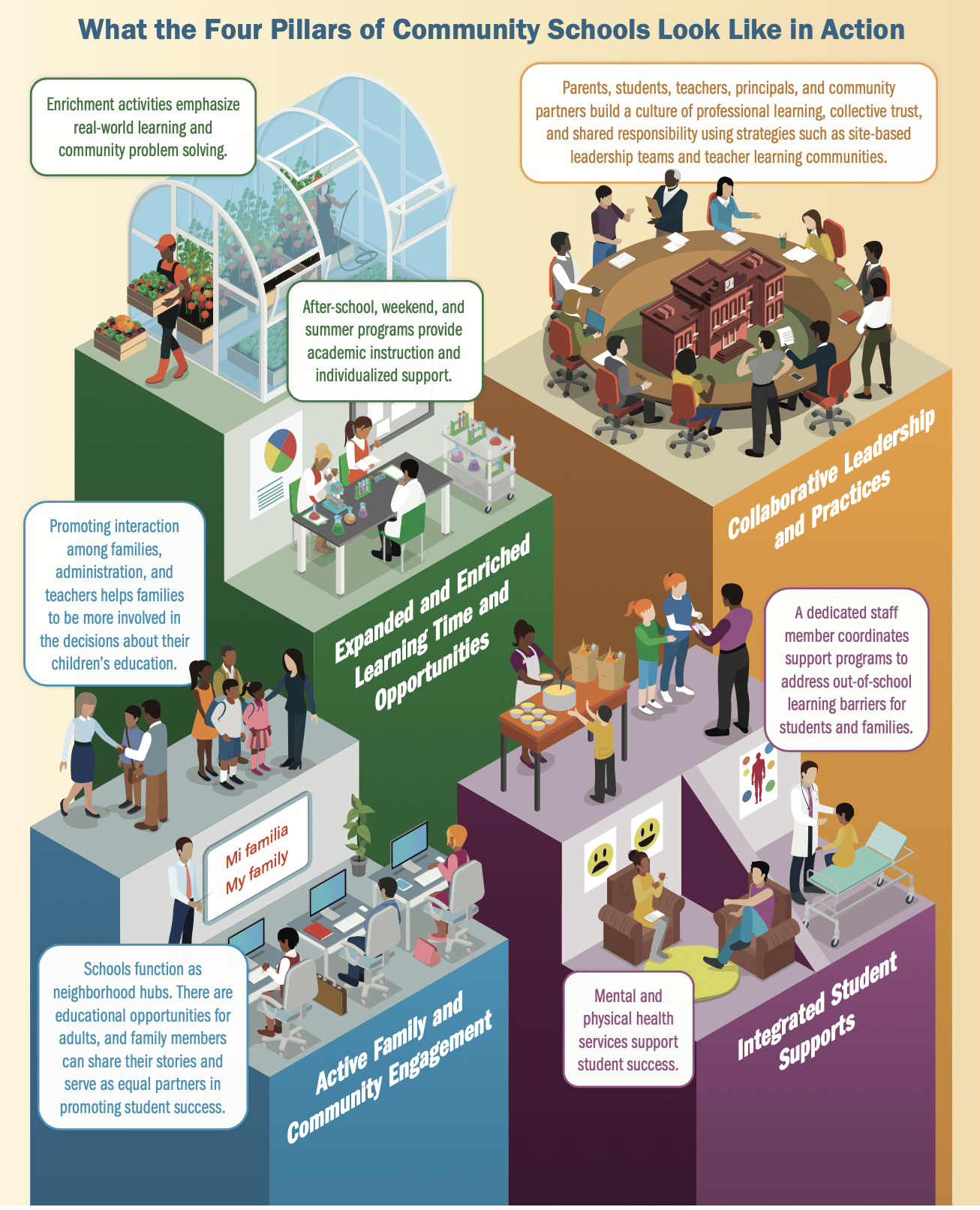 Our Statement on Community Schools

In the context of Little Rock, it’s important to understand that a Community School is not a governance model. It is a student support model that is structured to provide schools, students and their families access to services and resources that will help students to maximize their educational opportunities. This is tailored to each school’s individual student and family needs. These wrap-around services could include after-school care, pre-K for families, health services, mental health, food, clothing, tutoring and student engagement programs such as robotics or a family yoga night.

Community schools are typically managed by a school liaison or staff person, who is often titled community school coordinator. This person is the link between school leadership and teachers, students and families. The coordinator must seek authentic voices as input about the needs to be met. They must structure the partnerships and resulting agreements with organizations and agencies who may operate on or off campus. They must assess and provide for school-wide needs and those of individual students and families. They will meet with providers and families in need of support. They will also be responsible for evaluating those programs and services to determine their effectiveness and efficiency. The Governor referred to them as wrap-around services in a written response to John Brummet shared on Facebook. The Governor said, “The preliminary results tell me that additional wrap-around services do make a difference in the schools.…”

ACCS began originally as a partnership between Community Resource Innovations and the Rural Community Alliance. The Coalition invited a network of stakeholders to the table to look for ways to expand community schools in Arkansas. There are a few models of schools with extensive services already in Arkansas. Springdale and Southside (Van Buren County) are just two examples. Neither of these have the full Community School model with a coordinator, but they have focused and effective efforts for meeting student and family service needs.

ACCS partners included state agency representatives, educational professional associations, and a host of nonprofit organizations. Also, a few district representatives participate when possible. Early on the group received support from its founders and was quickly joined by the Winthrop Rockefeller Foundation and ForwARd Arkansas. ACCS heard from national community school professionals. The founders toured and studied several community schools in other states. We went to conferences and we learned. ACCS developed two videos, a website, and a Facebook page to get the word out. There is a corresponding national organization, the Coalition for Community Schools. ACCS participates in two of its national networks: one for State Coalition leaders, and we are new to the Community School Research Network.

ForwARd became more deeply engaged as a result of learnings from its work in five ForwARd communities. ForwARd funded staff travel to a national conference and a subsequent national meeting of state coalition partners. ForwARd has also worked with communities to seek Community School funding.

In the most recent legislative session ForwARd staff, who serve as ACCS facilitators, drafted a resolution near the end of the session. It was run in a bipartisan effort as a Senate Resolution (SR25), sponsored by Sen. Joyce Elliott and Sen. Jim Hendren. As follow-up to that work, Sen. Elliott was one of the first to raise the call for community schools in Little Rock’s “F” schools as one means to better support the student and family stakeholders in those schools. ACCS applauds that direction.

ACCS and ForwARd Arkansas are deeply interested in ensuring that Arkansas’s rural schools are not left out. It will be important to continue to work together to find opportunities in urban and rural environments. To that end ACCS invited the national Director of the Coalition for Community Schools, José Muñoz, to Little Rock. Because of all the ground-work that has been laid by our partners and ForwARd staff, Muñoz is coming. The timing is perfect.

Thank you to all the ACCS members for your valuable time and insights, Rural Community Alliance for believing in community schools and leading, ForwARd Arkansas for staff time and funding support, Arkansas Advocates for Children and Families (AACF) for sharing space with us, the Winthrop Rockefeller Foundation for initial meeting funds, Community Resource Innovations for funding and organizational efforts, Sen. Elliott and Sen. Hendren for leading with the resolution and to AACF and the Association of Educational Administrators for joining in support of the resolution. Thanks to Gerard Matthews and Brad Cameron who have provided discounted video and web services for us. So many individuals, not named here, have supported and assisted with this work because they seek the best for all our students. New support is coming from all directions.