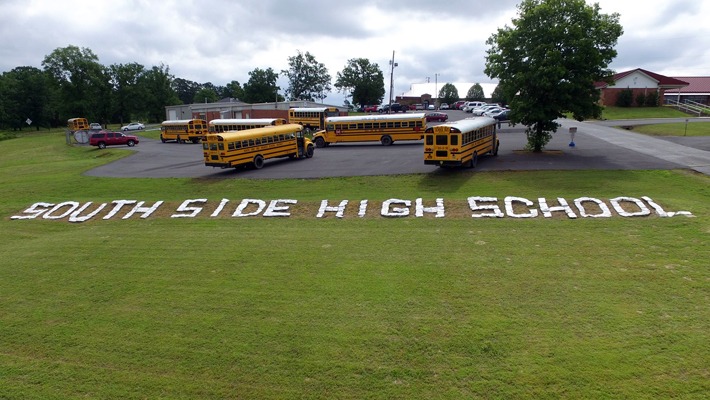 Is the community school model viable in small, rural school districts? Community Resource Innovations (CRI) and the Rural Community Alliance (RCA) believe the answer is a resounding yes!  Recently, Jerri Derlikowski and Maria Jones, both of CRI, and Candace Williams, from RCA, traveled to the Southside Bee Branch School District to visit school leaders. The group discussed the amazing array of programs and services provided to local students and families in the small community. The visit was prompted by positive feedback from the National Community Schools Coalition and the Winthrop Rockefeller Foundation.

South Side Bee Branch School District is a small, rural school district in Van Buren County, Arkansas. The district has approximately 500 students and is located on Highway 65 between Greenbrier and Clinton. An example of the district’s rural nature could be seen when it posted alternative snow routes for buses. One of the bus routes, which were described by the driver’s name instead of a route number, stated, “Mr. Jim Hopper’s bus will meet at the Café on top of Bee Branch Mountain at 7:20 and old Caldwell Feed Store at 7:30.” This prompted an inquiry from a parent about students who might not be able to get “down” to these locations.

The district was once part of the Schools of the 21st Century initiative of Yale University. (This not the same as the federal funding program for out-of-school services, called 21st Century Community Learning Centers.) According to the website for the Yale program, “Arkansas and the School of the 21st Century (21C) [initiative] have a long history. The first 21C site in the state, Paragould’s School of the 21st Century, was established in 1992. Other schools in Arkansas expressed an interest in the program, and in 1997 the Yale Center for Child Development and Social Policy started working on a statewide presence in Arkansas with the Arkansas Department of Education. Additionally, the Ross Foundation made a substantial investment in the Arkadelphia school district to enable district-wide implementation and outreach to the wider community.”

The Winthrop Rockefeller Foundation initiated a five-year partnership with Yale University to support the development of a statewide 21C network, beginning in the fall of 2001. The Foundation built on Schools of the 21st Century to address early care and the ongoing education needs of children in Arkansas. Five years later, when the funding ended, many of the schools continued to operate the original programs or newly developed programs modeled on the same principals. About 20 Arkansas schools, including the South Side Bee Branch district, participated.

The 21C initiative, as part of the Edward Zigler Center in Child Development and Social Policy at Yale, has been a proponent of the community school model. The Zigler Center is represented on the steering committee of the Coalition for Community Schools.

Deb Swink was at the South Side school district during the 21C grant period. Ms. Swink is now the special education director at the Clinton School District. She is also a member of Yale University’s The School of the 21st Century Leadership Council and serves as a national trainer for the Mutt-i-grees Curriculum. She has recently been appointed as a Senior Associate and National Trainer for the Yale School of the 21st Century. Mutt-i-grees is a learning curriculum using interactions with shelter animals to build social and emotional skills in students.

Ms. Swink says that South Side Bee Branch did not implement the full community school model with a community coordinator. But, staff within the South Side schools adopted that function by building resources at the school and connections to programs off-site. It was an informal way to accomplish the same purposes. The best thing about the 21C work was periodic phone calls with schools from around the country to share new ideas, according to Ms. Swink.

In our meeting, the staff members shared a lengthy list of programs and family resources in the district that they organize, manage and access.

Examples of South Side campus programs and resources include:

The school works with the community to meet needs through businesses, churches and community organizations. The district has revamped some of its old WPA-era buildings and built new ones through income brought to the community as a result of the shale-oil boom. This has created space to house pre-K and health services. Although the shale-oil boom era is closing, the district has used the opportunity to invest in their school facilities. A large part of the district’s success in meeting student needs has been through collaborative efforts to create new solutions, seek grant funding and integrate the surrounding community into school programs and services.